It’s a fair system: Mediocre girls get to fuck around with guys who won’t settle for their likes once they grow and become more accomplished, while guys get some practical, hands-on experience with real chicks. These are glorious times for subpar chicks, because they get to ride a cock carousel of overeager young men who have yet to establish a set of standards. Even if he isn’t really into her, he’ll find a few features to focus on: big ass, big boobs, cute face, or a cool personality coupled with the ability to suck a mean cock. It’s a golden era of sexual exploration that is filled with grand victories and embarrassing hookups for the budding male.

Then there are the dredges of the female gene pool, the ghastly hags who scour the Earth in search of weak males. Their mere presence is enough to cause any self-respecting man’s dick to crawl up inside his body in self-defense lest he accidentally trip and fall into the fatal abyss that is her vagina…they lack any type of redeemable feature that could possibly give a man a chub…they are somehow able to weigh 300 pounds without having tits or ass…they are ugly as fuck, have a terrible personality, and no enthusiasm for sucking cock. These females fall below the Jack Off Line.

The Jack Off Line is a litmus test where a male has to ask himself one simple question: “Would I rather jack off than hook up with this girl?” It’s the bare minimum acceptable level of attractiveness a female must possess to make her worth a one-night stand.

Where a man’s Jack Off Line begins is subject to variables such as age, experience, personal tastes, degree of desperation, and the quality and quantity of his sexual prospects. While there is a small percentage of guys who are studs from the get-go and can secure some pretty hot chicks at an early age, most guys are not like that. In fact, when they’re first starting in the hook-up scene, most guys’ Jack Off Line lies somewhere between girls who are a 3 to 4, as I’ve illustrated in this handy chart:

The Jack Off Line’s threshold is tricky and treacherous terrain for a young man to navigate. Alcohol and desperation play a critical role in transforming a chick that is horribly unfuckable into a valid candidate for a hogging mission. Alcohol lowers his initial inhibitions and standards enough to give this female monstrosity a fairer shot than she deserves. In long dry spells, desperation for a female’s warmth and contact override his common sense and sense of sight, smell, and taste.

The Jack Off Line is never 100% static. Only through many years of trial and error is a male able to finely calibrate where on the 1-10 rating spectrum his own personal Jack Off Line lies. He learns to not only focus on the orgasmic payoff of getting laid, but to also consider the cost—time, resources, reputation, or the chance to hook up with a more attractive female if he had only been more patient.

Those of us who are able to survive the early trials and tribulations of fucking fat chicks, butterfaces, and shady bitches without knocking them up or becoming trapped in their webs of deception become hardened and salty. We slowly develop a newer, higher set of standards for ourselves. As we grow and more women begin seeking our attention, our Jack Off Line likewise rises. Where before we would have fucked a 5 without giving it a second thought, she now is no longer even worth investing the amount of time needed to get her into bed for even the few minutes it takes to fuck her. 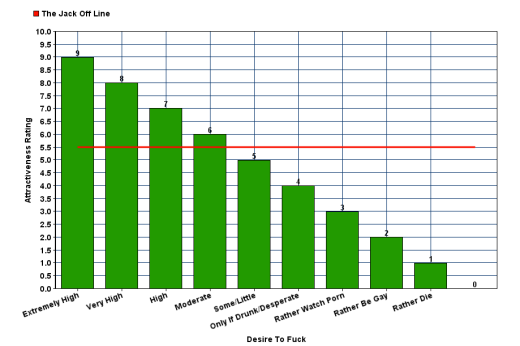 Fucking a girl who is on the cusp of The Jack Off Line is not the goal of any man who actually gives a fuck about the quality of his life. When he’s out to get laid, of course he’s going to go for the big prizes, but there will be times where he fails to catch such chicks’ attention. Then he’ll look at that homely—but for some strange reason, slightly sexy—5.5 across the bar. He’ll know that he can snag her with minimal effort. Then he’ll ask himself: “Would I rather jack off than hook up with this girl?”