Dancing is one of the most common and more effective ways to pick up a chick, slightly behind dragging her into a van. Unfortunately for me, I’m pretty shitty at it. The level of shittiness is equal to that of drunk white people at a wedding. The only thing I know how to do with some level of competence is twirling and a two-step. Nevertheless, it doesn’t stop me from incorporating it as one of the weapons in my arsenal in the grand crusade to get into a chicks’ panties.

I met up with my Ranger buddy, “Dirty Dick,” for the Old World Oktoberfest in Huntington Beach, CA. The original plan involved about six of us meeting up there and getting wrecked, but everyone flaked except for us two. He had with him his latest piece of fine ass who’s name doesn’t really matter. All that matters was his end-goal to fuck her and hoping a healthy dosage of alcohol into her system would expedite the process. We were drinking our overpriced beer, socializing, and scouting out a potential target for my irresistible charm. The pickings were slim since most of the women seemed to be with men already. I walked around and began to hit on a voluptuous Asian chick. I was quickly rejected and moved on. I hit on a thin white girl, and it was going well until she dropped the boyfriend bomb, after which I ejected myself from the conversation. I was three beers deep when I headed back to chill with Dirty Dick and his chick.

We were standing on the edge of the dance floor when we saw a decent looking chick with hipster glasses and middle aged woman dancing together. Dirty Dick pushed me to go dance with them, but I resisted because the timing didn’t feel right. Eventually, they stopped dancing and happened to stand next to me. Like a tiger on the hunt, I saw my prey, opportunity, and I pounced.

HipsterGlasses: “Yeah? You want to dance?”

Raul: “Let’s go.” I grab her by the hand and lead her to the dance floor.

She was a wild one. She eagerly spun underneath my hand as I twirled her again and again. She moved back and forth on the dance floor like a she-devil in heat, at times grinding up with me and them scurrying away suddenly, as if to tease me. Her plump breasts bounced, and her ass swayed lusciously. With each move, my eagerness to shove my dick so deep inside of her pussy that my semen would squirt out her mouth grew. She would aggressively dash toward me so I could twirl her. It required my full concentration and sense of balance to keep her from falling. I twirled her like a tornado.

Then she slipped from my hand, and I heard a big crash. She was on the floor screaming in pain. “Oh fuck,” I said and rushed to help her. I tried to lift her up and get her back on her feet. “Ahhh… put me down! Put me down!” she said. I complied with her request. She began to grab her ankle. Suddenly her family came over, helped her up and she hobbled away to sit down on the table. Her mother comes up to me and told me that it wasn’t my fault.

I stood there shocked for a moment, not really sure what to do. Dirty Dick and his current fling were looking at me, attempting to contain their laughter. I walked over to them.

Dirty Dick: “Did you break her?”

Dirty Dick: “Dude, she flew across the dance floor.”

I walked over to her.

HipsterGlasses: “No. I broke my ankle.” Someone hands her some ice and she it places on her ankle.

HipsterGlasses: “It’s not your fault. I broke it playing soccer eight months back. Tonight was the first night I’ve been out without my cast.”

Raul: “Shit…” I’m not sure what to say or do in this situation. I still wanted to talk to her because I still had the goal of banging her, despite the current change of events.

HipsterGlasses: “You don’t have to stick around. You can go back to having fun with your friends. I’ll be okay.” Tear start forming in her eyes from the physical pain.

I went to buy her the Vodka Redbull and left it with her and rejoined Dirty Dick. I felt that the best play was to give her a drink and check up on her on occasion since I had no fucking idea what to talk to her about in her hindered state. About 15 minutes passed and I decided to check up on her.

I attempted to make small talk in effort to distract her from her ankle pain and dared to dream that I still had the chance to get into her panties by playing the caring, empathetic guy. Though there was plenty of evidence toward the contrary, I gave it one last shot.

Raul: “How about you give me your number, and I take you out to make up for this?”

HipsterGlasses: “I don’t really trust you yet. Maybe if you get me another drink.”

I walked away with the full intent of boozing her into forgiving me when I ran into two other girls hanging out. I completely forgot about HipsterGlasses and began to hit on them. I must have talked to them for 15 minutes when I learned the one I was targeting had a boyfriend and the other one I wasn’t really into. I went to the bar and ordered a Vodka Redbull. 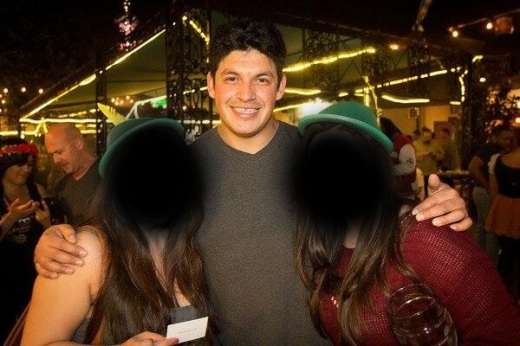 Which do you think was the cute one?

By the time I got back to the dancehall, HipsterGlasses and her family were gone. I sighed and headed back to hang with Dirty Dick, who at this point was devouring the face of his female companion. There were no other single chicks to hit on, and I resigned myself to getting drunk. I was 0 for 4 for the night. Not every night can be a winner, but every night can be a learning experience. This taught me that if you break a girls ankle and are still trying to get into her panties and are going to buy her a drink to do so, don’t get distracted by other girls. Keep your eyes on the prize. Or maybe there isn’t any lesson and random shit just happens, and there is no way you could have succeeded any way.

“Do you have any other wacky adventures with the fairer sex?” Yes, of course: The Pick-Up Follies: The Gimp