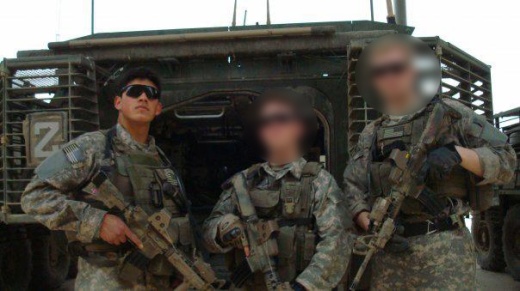 America’s Generation Y can be divided into two distinct groups: Those who served in Iraq and/or Afghanistan, such as myself, and those who didn’t. Taking an educated guess, I assume a lion’s share of the readership of Thought Catalog are liberal arts degree bearing, student-loan debt ridden types who think those who joined the military were too stupid to go to college and were unaware cogs in the political war machine run by evil multi-national corporations with the goal of maximizing profit and exploiting the lower class. In turn, we think you’re a bunch of overly sensitive, pretentious, hyper-liberal pussies, so its even. Now, let’s begin to gain an understanding of each other’s perspective.

Our memories of our formative years are quite different. You headed out into early adulthood going to community college or university, be it full-time or part-time. You may have gotten a student loan, a scholarship, paid for it yourself, or used your parents. You may have gone to college parties, lived in the dorms, lost your virginity, and lived in an environment where you were constantly meeting new people while smoking weed. You studied with your classmates in the library and bitched about eating Ramen. The opportunities to meet members of the opposite sex were bountiful if you chose to take advantage of them. Your major causes of stress were your grades and classes. You had no idea what you wanted to do after graduation, but you’d figure it out when you had your diploma.

We headed out into early adulthood by arriving at some soul-crushing military base in the asshole region of some mid-west or southern state. We got yelled at, gave up every single bit of freedom we had, got our balls smoked off, and were taught to do things the way the military wanted us to do. After basic combat training and our job-specific school, we were assigned to our unit where we had to deal with more military bull shit on a daily basis. For men in all male units, meeting women was rare and our best shot was just walking around the local mall or using myspace because we were too young to go to bars. Our major causes of stress was the fear of pissing off our team leader or squad leader and thus getting our world destroyed. We had no idea what we wanted do to after the military, but we’d figure it out once we got out.

Your major tests were your finals, ours was going to war. You discussed the moral questions, the legality, and made pro or anti-war arguments. We were there, whether we believed in it or not. You heard and read about it from the news; we lived it. You wondered how safe it was over there. Some of us never left the wire and conducted support jobs on the base. You wondered whether those couple of people you knew who were deployed were okay. Some of us left the wire every night and conducted direct-action raids to kill or capture the key leaders of the local insurgency. Unless they were from your hometown or were a family member, you didn’t know any of those killed in action. For a lot of us, there were too many of them we personally knew. Some of you were pro-war. Some of us killed. Some of you were anti-war. Some of us never fired a single shot in combat.

You held the very important responsibility of passing all your classes and getting good grades. You strived for that internship which would help you get your dream job. You fantasized about moving to the city, being part of a vibrant social scene as you worked a well paying and fulfilling job. We held the very important responsibility of learning to be proficient at our job so we didn’t fuck up and accidentally kill our buddies. We strived for that promotion to the next rank so we would have to deal with less bull shit and be treated like human beings again. We fantasized about getting out, attending college using our GI Bill and smoking weed by the beach as we lived the college years we missed out on.

You grew up in a culture dominated by overt political correctness and thought of the opinions of some your professors as gospel. You spent your summer in your hometown working some low-paying gig and partying it up at night. Your idea of a brutal winter was when the heating system went down in the dorm rooms for a couple of days. These two wars were barely on your radar, since it didn’t directly effect you and your daily life. You even forgot we were still in Afghanistan in the mid-00’s because all the focus was on Iraq.

We grew up in a culture dominated by masculinity and thought of our Platoon Sergeants as demigods, even though they may have been only 26 or 27, we lived in total fear and awe of him. We sweated our balls off in the scorching heat of the Iraqi summer and froze our balls off in the blistering winter of Afghanistan. For us, it was not if we were going to go, but when. Our lives were dominated by deployments and training to be deployed. Some of us popped our deployment cherries in the mountains of Afghanistan and other’s in the streets of Iraq.

You made friends with your classmates; we made friends with the people in our platoons and companies. You had a terrible break-up your sophomore year in college that caused you to fail one of your classes. We had a terrible break-up while deployed, but drove-on and struggled to keep our mind on our job, fully knowing the person we loved was back home fucking someone else. You had the option of dropping out of college when it became too much to handle, we were locked in for the X number of years we signed up for.

We’re the same generation, yet, we had such a different experience of what the world was. For you, that semester you spent studying abroad meeting new people, tasting strange foods, visiting the tourist sites, and were introduced to new ideas were defining moments in your life. For us, the defining moments were those months spent in a war torn-land where any person in the population could be an insurgent, where we saw the cities through the green hue of our night vision goggles, and were introduced to new insurgent tactics and counter-insurgency tactics. Just like you, it drove us to understand the world in a deeper sense. We read books, articles, and watched documentaries about the middle east and the world in general, in turn we learned to determine our own thoughts and opinions on it.

We were both set loose on the same economic gaggle-fuck of a real world that the Baby Boomers and Generation X left us with. We were both lied to: When you got out of college and couldn’t find a job that made use of your expensive Communications degree that taught you how to comprehend the nature of human communication, the symbol systems by which it functions, and the environments in which it occurs, you went to live with the folks until you figured shit out. When we got out of the military and couldn’t find jobs that made use of our expensive training that taught us how to jump out of airplanes, fast rope out of helicopters, lead men, and conduct close-quarter combat, we went to live with our folks until we figured shit out.

Now with the Iraq War over and Afghanistan drawing to a close, we’re attempting to find our individual identities, independent of being a veteran. We’re attending your colleges, working at your jobs, and starting our own businesses. We’re a creative bunch with stories to tell and are working our asses off to become writers, film makers, actors, photographers, and artists. We’re seeking to become professionals and thus attending your medical, law, and business schools. We may have had a later start in life on our formal education, but our real world knowledge runs deep. We don’t think we’re better than you and don’t want your sympathy. We know we volunteered for the job and did it to the best of our ability. In essence, we know there is one key difference between us: we’ve already been through the hardest time in our lives, whatever else the world throws at us, we can handle it.

Though I’ve been featured on Thought Catalog for month or so now, I’ve restrained from making a blog post about the articles because they were all re-posts of articles I’ve had written earlier on this site. Now, I am happy to say I have written my first piece of original content for them and am making my first pay day as a writer. Don’t worry, I’m still going to keep on writing here mainly and letting you into my fucked up mind. Now go check out my latest piece, Three Surefire Ways to Get Over Your Ex-Girlfriend. Also, make sure you let those haters in comments section know I’m the fucking balls.

“Where else have you been featured?” On Sass & Balderdash Mother Fucker: Four Ways to Please Your High-Value Man