So you decided to join the United States Army because:

A) You are super patriotic. America!
B) Your high school sweetheart broke up with you.
C) You had nothing better to do and going to war sounds cool.

You walk into the recruiter office and eyeball those posters of soldiers with stern faces of quiet dignity and confidence, you lack both. Words like Loyalty, Duty, Respect, Selfless Service, Honor, Integrity, and Personal Courage engulf you. Your recruiter, Staff Sergeant Snuffy, a former Ranger, tells you about the Army life, benefits, and brotherhood. Then with a wink and smirk, tells your scrawny, most likely pimply faced self, that chicks love men in uniform. You want that Army groupie loving; you sign up. You come home, tell your parents you’re joining; mom cries, dad sees your wasted potential. You just got your acceptance letter from the Devry Institute! They don’t understand, “I’m going to be all I can be, an Army of one, and Army Strong! Hooah!” you protest. Later you’ll learn saying “Hooah!” makes you a total tool. You do the research and know that it’s going to be physically tough and you may be blown up by an IED in Afghanistan. But, that’s part of the job you smugly tell yourself. You’re going to be part of the brotherhood of arms! You go off to Basic Combat Training where you will get destroyed by your Drill Sergeant; little did you know there are other things you didn’t think about…

Army Bases Are in Crappy Places of the Country

Have you ever dreamed of being trapped in a small, crappy, town in the middle of nowhere with your only options to leave are: Going to Afghanistan, Iraq, or Fort Leavenworth because you went AWOL? Great! Since you’re three times as likely to end up in world famous towns like Killeen, Texas, Fayetteville, North Carolina, Columbus, Georgia, Barstow, California, and Leesville, Louisiana as opposed to a place you may have actually heard of before one-second ago. These towns are so horrifying in their lack of any social life outside of the military, that those poor souls who wasted their precious youth assigned to these wastelands are shaking their heads at this very moment, tears pending, thinking about all the drunken college girls they could have banged at their local State University.

The Army has a disproportionate amount of bases in the mid-west and dirty south. Why? Army bases require a lot of land to operate and accommodate its soldiers, equipment, buildings, and training areas. Land costs money. Uncle Sam doesn’t believe in paying premium for land in places where soldiers actually want to live and have some semblance of happiness. Being happy and content is not what the Army values in its soldiers, it values getting the most out of them at the cheapest possible price.

Most of these local communities economy are highly dependent on the their respective military base. The city of Killeen has 58,187 people(including soldiers) employed by Fort Hood, which is 68% of its total employed population. Killeen School District coming in at a pathetic second with 6,000 people. Fayetteville, a.k.a. Fayettenam, about 60,000 employed by Fort Bragg. You have to also consider all the money those soldiers are pumping into the economy with their purchases of the only things that numbs the pain, alcohol. With so much of the local economy depending on the Army base, it creates military culture and mentality that leaves little space for tree hugging, burning manning it up, and drum circles.

Sure, the Army has what have been dubbed “Dream Stations” like Germany, Italy, and Hawaii. But, like most of your dreams, they’ll never come true.

When you picture being the Army, what do you think? You think about all those World War 2 and Vietnam War movies you saw growing up. The protagonists losing his innocence in the horrors of war and in the end we all learn that war is a senseless act and that a whole generation of men are forever destroyed. Now when you see a war veteran, what is the number one question you want to ask him? If he was that young man who barely made it out of the shit? You want to know if he has ever killed anyone or been shot at. Maybe the veteran has, maybe he hasn’t; either way, its none of your business. If he wants to tell you, that’s on him to tell, not on you to ask.

Nick Palmisciano, CEO of RangerUp, has by far the best rebuttal I’ve heard:

He points out that there are only three possible responses that you’ll get, which I’m paraphrasing:

1)No, they haven’t and you’ll probably thinking less of them for never having done so, because they don’t fit your idea of what a real veteran is supposed to be.
2) Yes, they have, they’re dealing with it in their own way, and don’t need to talk to you about it.
3) Yes, they have, and they’re just regretful they didn’t get that one knife kill.

You’ll Do Every Sort of Menial Labor Known to Man

You know all rounds you shot at the range? There is brass leftover! You, as the cherry private have to police up those thousands of rounds your buddies and yourself shot. You also had to set up the range, unload the boxes of heavy ass ammo, and then break down the range again. You know that M4 you shot? Your ass better make sure that is spotless.

Jumping out of airplanes? Awesome… for the 15 seconds it lasts. Before hand you had to wait, fully harnessed, for 2+ hours and afterwards there is Parachute Shake Out detail. Thats where all the privates and a few unlucky NCO’s get to spend the night untangling and taking out all the weeds and brush that have been caught in the parachute while it dragged a soldier across the earth.

Basically, as a cherry private, you’re the detail bitch and it will stay that way until you become an NCO. You tough it out and suck it up because every single job does have its downsides. The downside to this job is doing all the shit details required to make the cool training possible. 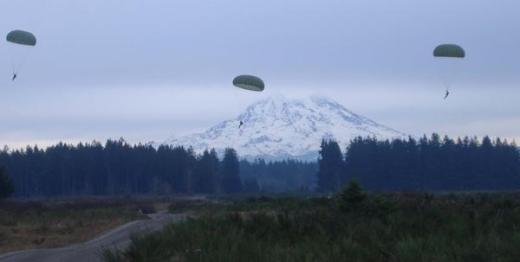 Only took three hours to get this shot!

You become a soldier because of all the pride, honor, adventure, and to a lesser extent, because chicks dig men in uniform. The thing is, everyone you’re around, 10,000 to 50,000 people depending on which major base you’re assigned to, is also a soldier. You are not special at all. Unless you turn out to be one of those douchebags who wear their uniform with camelbak to the mall and have an Army Strong bumper sticker, you’re going to try to hide the fact that you’re a soldier. You will avoid saying what you do and some times you may flat out lie in a hopeless effort to disguise yourself. It won’t work because your hair cut and demeanor will you give away.

Why would you attempt this? Because around any Army base, soldiers are a commodity. Odds are, that voluptuous Latina you’re trying to pick up in the little black dress, is the daughter of a retired Sergeant Major or Colonel. You see that blonde over there with the amazing fake breasts? Her ex-husband is a Sergeant First Class and she now hates all Army guys because he cheated on her. That innocent looking petite asian girl? She got a train ran on her by the Mortar Platoon last night. Or that slightly chubby chick who has a decent face and can become fuckable three or four drinks from now, her boyfriend is deployed and she is down to cheat.

These are facts of life around any sort of military base. You’re are not special by any means and simply being an Army guy will not net you any quality strange. Its great you’re serving your country and many women find it sexy. But so are the other thousands of soldiers around you. You have to develop other characteristics and qualities that distinguish you from your peers. Whether it be you can play the guitar, ride motorcycles, are funny as hell, mad beer bong skills, or you can write like a mother fucker. You must have a deeper personality than just being a man in uniform.

Eager To Pop My Cherry On The Battlefieldl

Politically Incorrect and Loving It

Raul Felix is a 33 year old Mexican-American from Huntington Beach, CA. He currently lives in Long Beach, CA. He served in the United States Army from 2005-2009. He writes about sex, dating, women, military life, manhood, Mexican-American culture, motorcycle travel, and anything else he damn well pleases. He currently attends college, bartends, and writes. He has been featured on Coffee or Die Magazine, Thought Catalog, Return Of Kings, Matador Network, and Ranger Up. He's on a quest to be one of the greatest writers of our era. You can reach him at raul.felix275(@)gmail.com

One of the few pics I have from my deployment to Iraq in 2008 and my face is covered by a branch. These were good days.
Social distance party.