With the current global economical crisis and quite possibly the fall of the American empire, times are getting tough for people of all professions. While we read countless articles detailing the plight of recent college graduates who are unable to obtain jobs in their chosen career path of Communications, Journalism, and baby sitting retarded kids. Not to mention, of office drones losing their soul crushing cubicle jobs to Abu in India who does it for half as much and feels having a crushed soul is better than starving. There is another, forgotten segment of the population that is being pounded by the fall out. We’re talking about a profession with a long history, deep culture, and high espirt de corps; being a bum.

The glory days of bumming are over. No longer can you create a funny, yet truthful signs and expect people to give you their loose change. The internet has desensitized us all and at the most you’ll get out of your clever “Why lie? I need beer,” sign will be a roll of the eyes and people thinking that’s so 2007. In order to help you compete in these cutthroat times, these are three simple ways to help you get those spare nickels, dimes, quarters, and the holy grail of them all, a spare dollar. 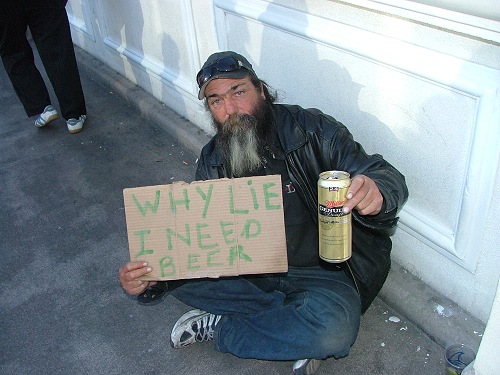 Get with the times man!

People these days expect a lot out of their bums. It’s not enough to just be stinky and dirty, you have to be stinky and dirty with a purpose! Start singing, juggling, street painting, or break dancing. People will begin to build their own little back story for you. They’ll assume that you were once an aspiring entertainer or artist and then the drugs and alcohol took too firm a hold of you and beat you down to the life the you live today. People love that sort of drama.

The key is to start developing your talent in public right now. You suck a drawing? Just start drawing lines and squares and whammy, you’re a misunderstood modern artist. People will toss you the occasional nickel while you paint. Its like getting paid to learn and its way more fiscally responsible than getting into debt $40,000 for a Fine Arts Degree. Can’t sing to save your life? Invest in a $9 harmonica and start using your raspy frog voice to sing the blues. Use your brutal existence as a source of inspiration for your music. Lyrics such as:

I had woman
Left me for another man.
Now I’m out here in the cold
I know you don’t give a damn.

Just need a dime or a quarter
So I can go buy some booze
I’ll drink deep into the night
While I sing the whore of an ex-wife blues.

No money for paint supplies or a harmonica? Start break dancing or juggling random stuff you find in the garbage. Both require no monetary investment and with your first nickel you’re already in profit mode and thus already doing way better than 90% of American businesses. Both are skills that can be learned for free via youtube at the computer stations at your local public library, you know, that place you use to go shower at in the sink. 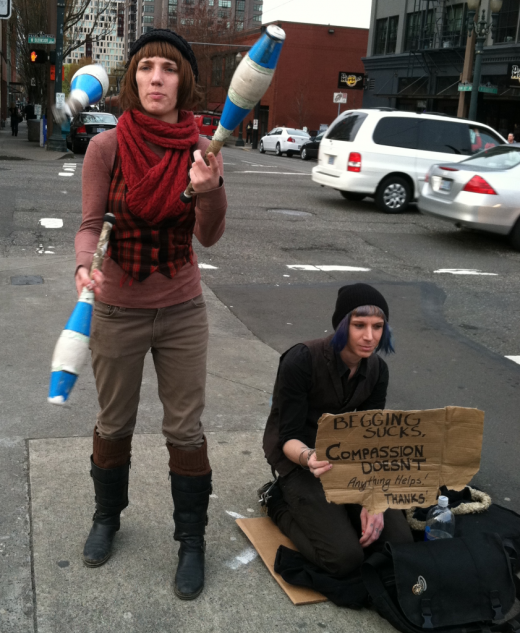 Now these kids are going places.

You’re a run of the mill able bodied bum with a drug and alcohol problem so severe that it cost you all your friends, family, and means of employment. Its tough finding work when you’re an addict, you justify. That may be so, but to the rest of the population you’re no different then the 20 other bums they passed that day. What makes you stand out? What makes your unique struggle so much more special than your peers? A horrible disfigurement may be your answer!

Human beings naturally take pity on people who are crippled because it digs deeply into their own fears that it could be them one day should such an accident happen. You can leverage this fear into profit for yourself.

There are various ways you can cripple yourself. You can run into traffic or jump off the 2nd story of a building. One other effective method would be to owe enough money to the Mafia where they will break your legs, but not so much where they will kill you. Sometimes its best to let the pro’s do the work.

Now, this will require a real commitment on your part. By intentionally becoming crippled you have decided you’re no longer making bumming a “just in the mean time thing while you sort things out” but a full fledged career. A big step proving that you’re growing up and taking life seriously. Don’t try to fake it, because people can see through that bull shit and will call you out. There is also an increased chance of getting robbed because you will be a more vulnerable target. But those extra few bucks you get a day will more than make up for it. 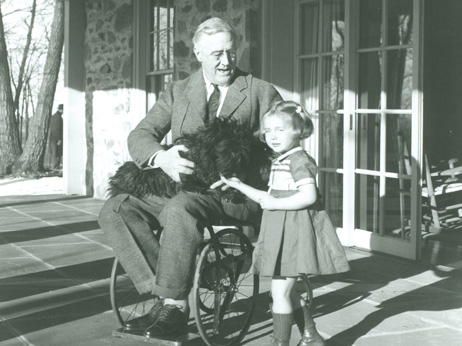 It’s a fact that people care more about dogs than their fellow human beings. It quite justified actually, because while dogs show love unconditionally, human beings are conniving and have ulterior motives. Yes, it may be another mouth to feed, but it will be a loyal mouth the will attract so much sympathy from the animal lover in all of us that you’ll be balls deep in nickels.

Many people won’t turn twice to look at you if they know you’re starving. But they will stop immediately and pet a cute little puppy and check him out to see if he is okay. In the process they will ask you what his name is, scratch his belly, and make kissing faces at him. Since dogs can look both pathetic and adorable at the same time, they’ll give you some money to make sure he gets feed. Some untrusting folks will just buy the food for the dog directly using your booze money and feed it to him. It’s a little dehumanizing to you, but you must remember never to show any jealousy toward your four legged friend. You two are a team, just let him do all the work and you may even be able to afford vodka that doesn’t come in a plastic bottle.

Being a bum with a dog puts you in an elite class in the brotherhood of homelessness. Its like being a Fighter Pilot in the Air Force or a Ranger in the Army. It’s rare, unique, and so few people can pull it off or have the opportunity to do so. It will be tough at first, but once you accept this challenge, it will pay you back tenfold in profit and in love. It’s a perfect symbiotic relationship. 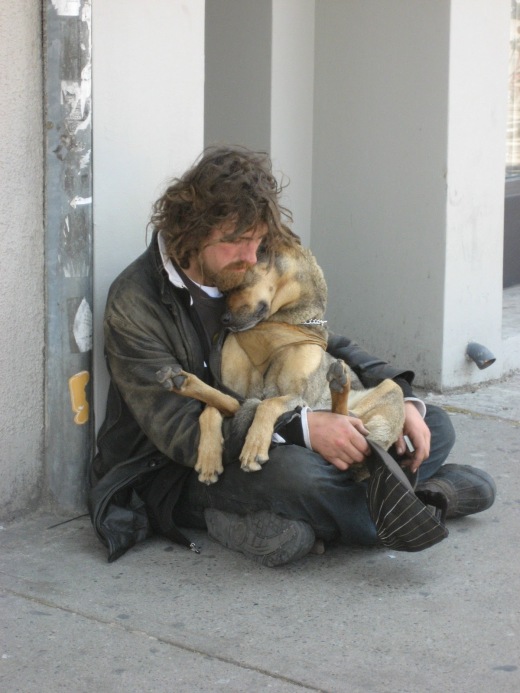 You only feel bad because of the dog.

We all need to up our game in these turbulent times. It’s suggested that you only do one of these at a time. Pace yourself and perfect one of the three, before moving on to the next. For those of you of true ambition, you’ll be crippled, singing the whore of an ex-wife blues, and having your best friend howling along in no time. Just because your at rock bottom, doesn’t mean you can’t shoot for the moon!

Read another! It’s not like you have anything better to do: Four Things You Didn’t Think of Before Joining the Army